Is Silver “Going to the Moon”?

The latest buzz from the retail squad at wallstreetbets, the investor board that sparked the run on GameStop Corp. last week, is that they’re going to shake out the shorts in silver. The metal started to gain last week after comments about it began appearing Wednesday on wallstreetbets and it gapped higher at the start of trading in Asia Monday.

While I think demand for silver is well underpinned over the longer term thanks to its widespread use in the “clean energy” industry, silver looks to me to be fairly priced on a number of metrics and I see no fundamental reason why it should go shooting higher. Of course that doesn’t preclude a speculative rally, even a sustained one, but I suspect that it would be a typical momentum play that would fade sooner or later.

The reasons behind the buzz centered on various conspiracy theories that fans of the precious metal have talked about for a long time, such as allegations that its price is suppressed by banks and the government to mask inflation. You can read a typical one here that argues silver should be $1,000 an ounce, which is substantially higher than its record high of $49.45 on 18 January 1980 or its recent high of $48.44 on 28 April 2011. (Please note that I am linking to that page for information only and I am in no way endorsing that view or in any manner, form, shape, or fashion indicating that I agree with it, and this can by no stretch of the imagination be considered any kind of recommendation whatsoever. Rarely have I wanted to wrap myself in the disclaimer so completely.)

Google searches in the US for “silver” (the blue line) have surpassed those for popular retail stocks GameStop (red) and AMC (yellow).

As a result of all this interest, silver gapped higher when trading started up on Monday in Asia. At the time of writing it’s trading at $28.46, up 5.3% from the Friday close of $27.03. 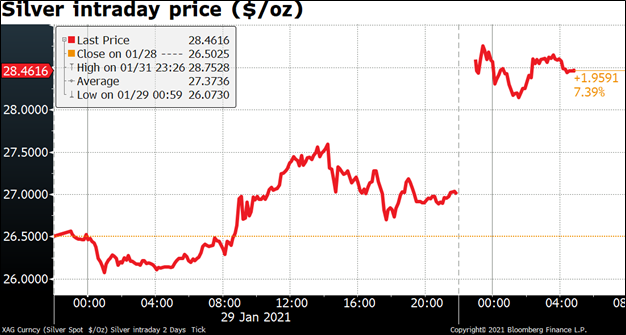 The problem is, the attack on GameStop worked because the hedge funds were massively short – short interest in the company was something like 148% of the outstanding shares, meaning more shares had been borrowed and sold than existed. But I don’t see anyone equally short silver – at least, not as far as I can tell.

According to the weekly Commitments of Traders Report, speculators in the futures market are long silver, as usual. 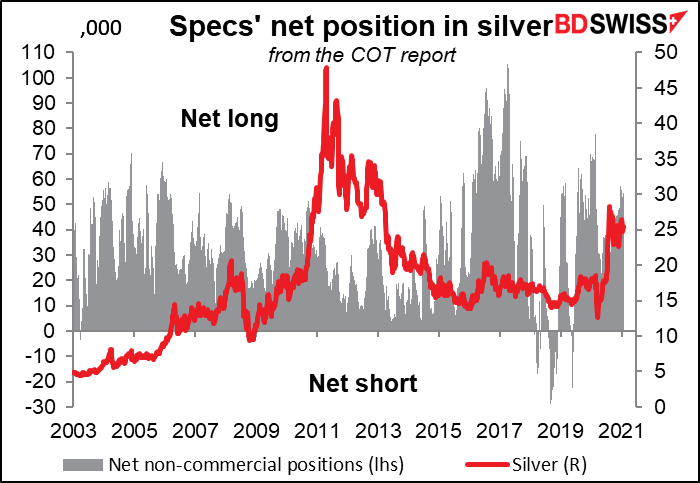 As are retail traders. 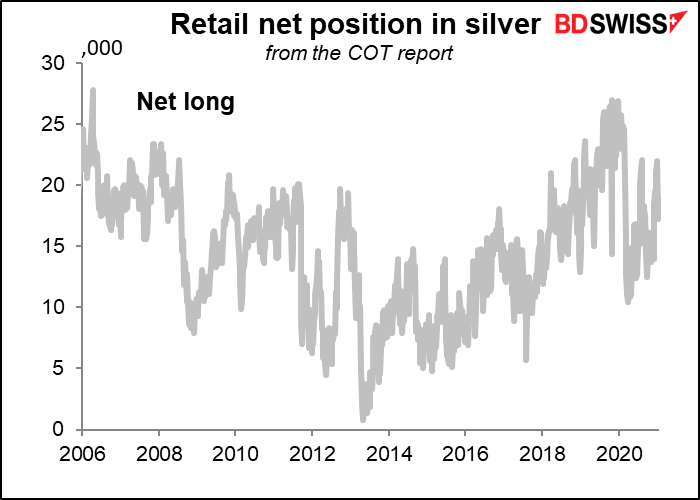 And most professionals. The shorts belong to producers, who sell their production forward to hedge against price fluctuations. 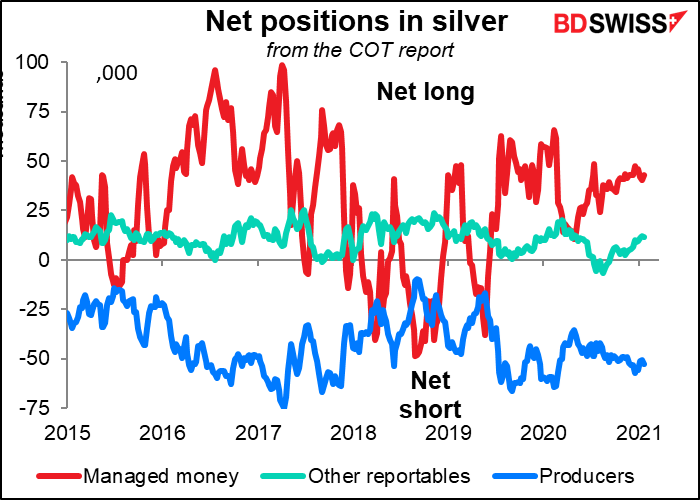 There may be some hidden shorts among banks due to rehypothecation, which is what happens when banks lend out gold or silver that has been deposited in their vaults as security for a loan or for safekeeping. This is similar to a stockbroker lending out stock that its clients hold to short-sellers. Rehypothecation has been a frequent topic of discussion among gold enthusiasts and I wouldn’t doubt among fans of silver too as they worry that a bank will lend out their metal and then be unable to get it back when the borrower goes bust. I have to admit I don’t know enough about the day-to-day workings of the silver market to have an informed opinion about it.

Looking at the price of silver, it doesn’t seem to be terribly out of line with the fundamentals. (Note that this analysis was run Sunday before the run-up in price at the opening of trading in Asia Monday morning.)

Silver seems fairly valued on a historical basis compared to other commodities. The gold/silver ratio, which last year hit a 5,500-year high, is back down to nearly the 20-year average. 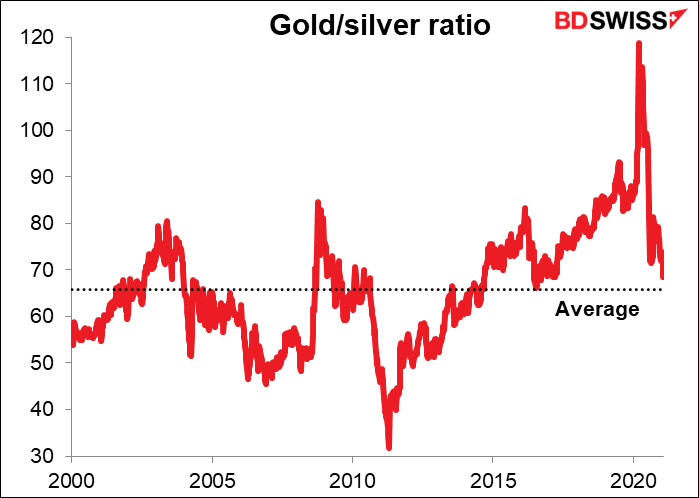 It’s expensive relative to oil, but maybe oil is cheap relative to silver. Vs other commodities though it’s mostly within the normal range for the post-Global Financial Crisis period

The result isn’t significantly different if we go back to 2000 – this way suggests silver is 6% cheap, whereas going back to 2000 shows it 11% expensive. Either way it’s about ±10% of its fair value.

There may well be a rush on physical silver – the websites of several companies selling precious metals were temporarily closed for business Friday due to overwhelming demand.

What surprised me though was that even as the price of silver rose and call options on the largest silver ETF, iShares Silver Trust, went bananas (up from $0.14 to a peak of $1.80…

…the amount of silver held by all silver ETFs fell to 905.2mn oz from 912.4mn a week earlier. This doesn’t seem to be consistent with a rush on silver or any short-covering by these major holders. 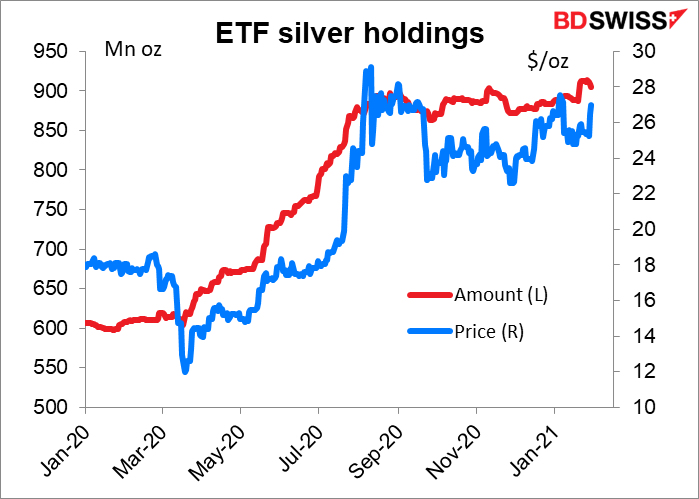 There is a long-term bull case for silver to be made, especially as silver is widely used in the “clean energy” network, such as electric vehicles and solar panels. (If you’re interested in this topic, I suggest you read the World Silver Survey 2020, bearing in mind that it was written by the Silver Institute, which is likely to take an optimistic view of the market.) But the industry is already well aware of these trends and it was in the price before this week.

In sum, I don’t doubt that there could be a speculative run-up in silver if the online community decides to gang up on it, but I don’t think there is a strong fundamental case for a sharp and lasting increase in the price at this point. 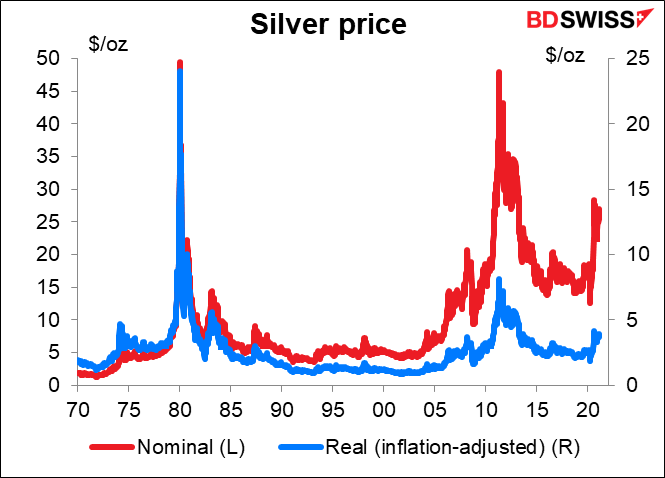 < Go back to overview
Marshall Gittler

FOMC Meeting: No Change in Policy, but Watch the Dots!

Positioning in FX and Precious Metals: CAD in focus after BoC Meeting

BDSwiss Copyright ® 2018 BDSwiss All Rights Reserved
Risk Warning: Trading in Forex/CFDs and Other Derivatives is highly speculative and carries a high level of risk.
Close
We use cookies to ensure that we give you the best experience on our website. If you continue to use this site we will assume that you are happy with it.Ok